We'll definitely add more lighthouse pages as we visit more parts of the province. The next big one on our list is Point Armour in Labrador, which is going to be part of our trip this June (2016).

The granite lighthouse in Rose Blanche is at the end of Route 470, 42km east of Port aux Basques. On the island of Newfoundland, the south shore is the most isolated part of the island. There are several outports east of Rose Blanche that are only accessible by coastal ferries.

The drive along the Granite Coast is very pretty. 470 is a narrow winding road, it will take you about 45 minutes to get to the lighthouse. The landscape is very rugged with very few trees. The coastal views are spectacular. 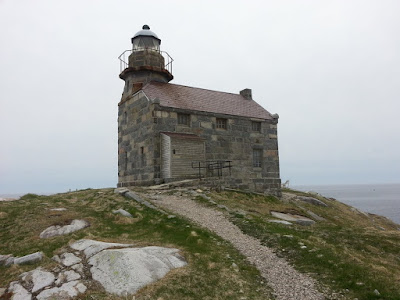 Cape Ray is only 20km from Port aux Basques. Just follow the Trans Canada from the ferry terminal and turn left on Route 408. You can see the sand beaches of J.T. Cheeseman Provincial Park, the coast near the lighthouse is very rocky. This is also a very windy spot, you are right next to Wreckhouse, which is billed as the second windiest place in the world. 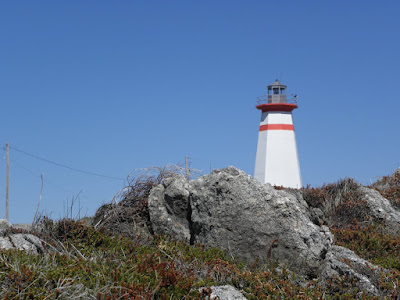 Cape Anguille is the western-most point on the Island of Newfoundland. You get there by driving through the beautiful Codroy Valley. Drive through the town of Codroy, NL. You keep going almost to the end of the road. There is a fairly rough gravel road that takes you to the lighthouse. There is a very pretty Inn at the lighthouse. You can park there, walk over to the lighthouse, and continue on a trail along the coast. The trail is a quad track that follows the shoreline. It's a very pretty walk. 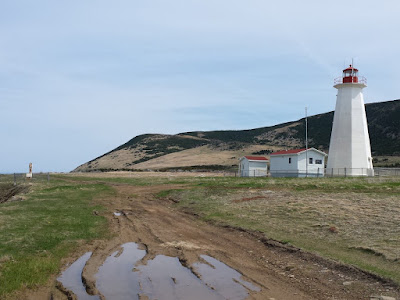 The Lobster Head Cove Lighthouse is located in the heart of Gros Morne National Park. It's easy to get to, just go into Rocky Harbour and turn right on the main road that follows around the harbour. The road for the lighthouse is just past the north end of town.

The lighthouse is a popular attraction in the park. It's manned by Parks Canada staff, that give tours and answer questions. There are nice public washrooms just off the parking lot. There is a picnic area and several trails that go around the rocky shore. The view from here is spectacular. Gros Morne is an amazing place. 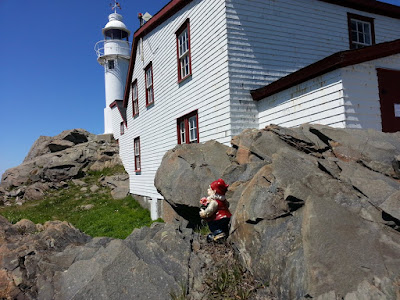 The lighthouse trail on the Cow Head peninsula takes you to this little steel lighthouse surrounded by forest. When we visited in June 2015 it was open and you could climb up a ladder and look out on The Gulf of St. Lawrence. We went back in September and it was freshly painted, but locked up.

It is no longer operational. It is one of many highlights on this easy to walk trail. The peninsula is also known as Summerside. All permanent residents were resettled back to the town of Cow Head. 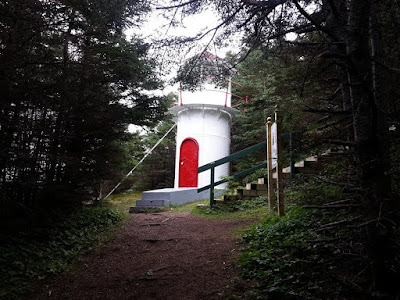 To get to Port au Choix you take Route 430-28 West from the Viking Trail (Route 430). Follow the signs for The Port au Choix National Historic Site of Canada. The lighthouse is about a mile past the visitor centre on a gravel road. You are driving to the end of the Point Riche Peninsula.

There is a large parking area at the lighthouse, you can start down The Philip's Garden Trail from here. When we were there in September 2015, we saw Caribou from near the parking area. The peninsula has both Moose and Caribou. 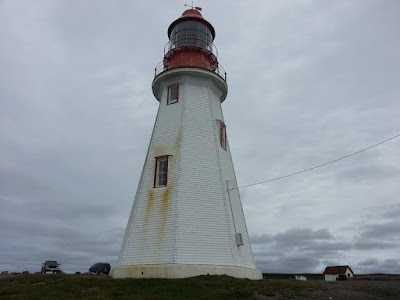 Posted by Bob's Newfoundland at 20:22