Newfoundland's nickname is 'The Rock'. It does not matter what part of the island you visit, you'll see lots of rock. The province boasts several sites that have great geological significance.

While walking trails we often find ourselves wondering how the various interesting formations came about. Our understanding of geology is pretty limited. We purchased a great book titled 'Geology of Newfoundland' by Martha Hickman Hild, available from Boulder Publications. The book has GPS co-ordinates, photos and descriptions of 48 sites across the island. The level of information will satisfy serious rock hounds. In our case, we are able to glean enough to satisfy our curiosity. We keep the book in the truck, it does not matter what part of the island you are visiting, there will be an interesting site nearby. 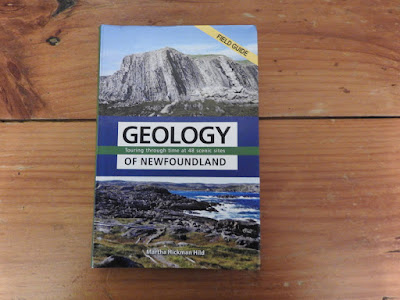 Western Newfoundland has the oldest rocks on the island. When you take the Western Brook Pond boat tour, you'll see the Long Range Mountains close up. The rock you are looking at was formed 1.5 billion years ago. The boat crew does a good job of explaining what you are seeing. 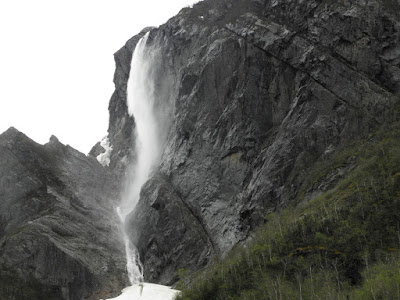 When you are in Western Newfoundland, we'd recommend 4 other very interesting sites for looking at rocks. In Gros Morne, you'll also want to visit Green Point and The Tablelands. Stop in Stephenville and you can check out a petrified forest along the Blanche Brook Trail. Finally, on the Port au Port Peninsula, we really enjoyed checking out the folded rocks at Piccadilly.

At Green Point you are looking at millions of years worth of sedimentary rock formed at the bottom of an ancient ocean. The layers of shale and limestone have been shifted dramatically so they are vertical, not horizontal. Looking at the cliff from the beach you are seeing a time record. The older layers of rock are to your right, the younger layers to the left.

There is a layer in the middle of the cliff that marks the dividing line between the older Cambrian period and the newer Ordovician period. This all happened just under 500 million years ago. Green Point has been designated as an International reference point for the geological time scale. Apparently there have been lots of geologists studying this cliff. 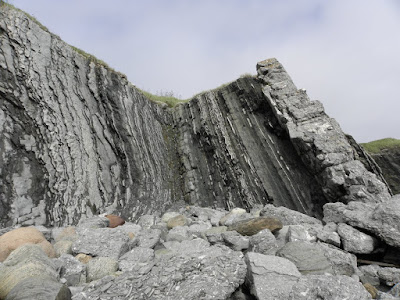 It's not difficult to get down to the base of the cliffs. The tricky part is timing. You want to go late in the afternoon at low tide. Somehow we lucked upon the right time. It allows you to get further out on the rocky beach to get a better look at the cliff. It also allows you to see all the vertical layers of rock coming out of the beach at a 90° angle. The walking is a bit tricky on the jagged rocks. For more information on where Green Point is and more photos, you can visit our web page.

This area in the southern section of Gros Morne National Park is very similar to the surface of Mars. It's a large area where the earth's mantle is exposed. The reddish, yellowish rock is peridotite. It's chemically unstable and water that seeps through it's cracks is slowly changing it to another type of rock called serpentinite. This process also alters the water chemistry. This recipe does not support plant life. The Martian surface is also largely made up of peridotite and serpentinite. 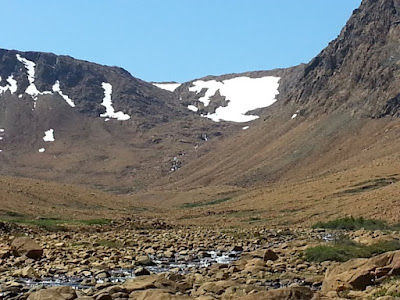 There are lots of ways to see The Tablelands. The simplest is to just drive the road from Woody Point to Trout River. There is a trail that you can hike on your own or with a guided walk by Parks Canada. You can also get another view of The Tablelands by going on the Trout River Pond boat tour.

The fossil trees along Blanche Brook are also very easy to get to. The trail starts right in Stephenville, next to an ATV dealer. You hike in about 1 km along the rocky stream. We first noticed what we thought were logs that the shallow water was flowing over. On closer inspection these were actually rocks. You need to get out and walk in the stream bed and you'll find lots of pieces of petrified wood. Don't take souvenirs, you need to leave it the way you find it for the next hiker. 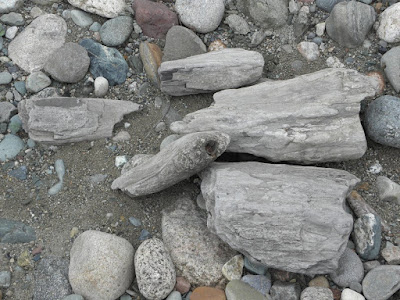 The trees are all the same species of primitive tree that is now extinct. They probably grew to a height of 48 metres and were some of the tallest trees of their time period.

This is located quite close to Stephenville in Piccadilly on the Port au Port Peninsula. It's right along an easy to walk beach. It is a bit of a scramble to get down to the beach. This feature is not in any of the tour books, but well worth checking out. There are no signs giving directions and there are no interpretive signs once you reach that portion of the cliff.

You will see layers of sandstone and crumbly dark shale. Forces folded the stronger sandstone layers into this interesting formation. Several of the sandstone layers are folded bottom up, so you can see what both the top and bottom of each layer looks like. 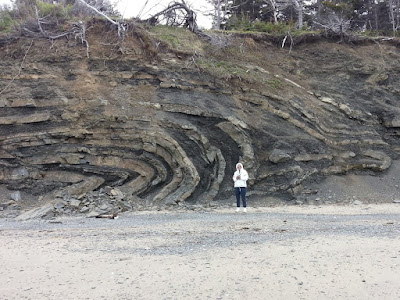 You can stop at the Parkview Variety in Piccadilly for gas and munchies. They gave us good instructions on finding the folded rocks. We've detailed it on our Piccadilly web page.

Posted by Bob's Newfoundland at 18:51